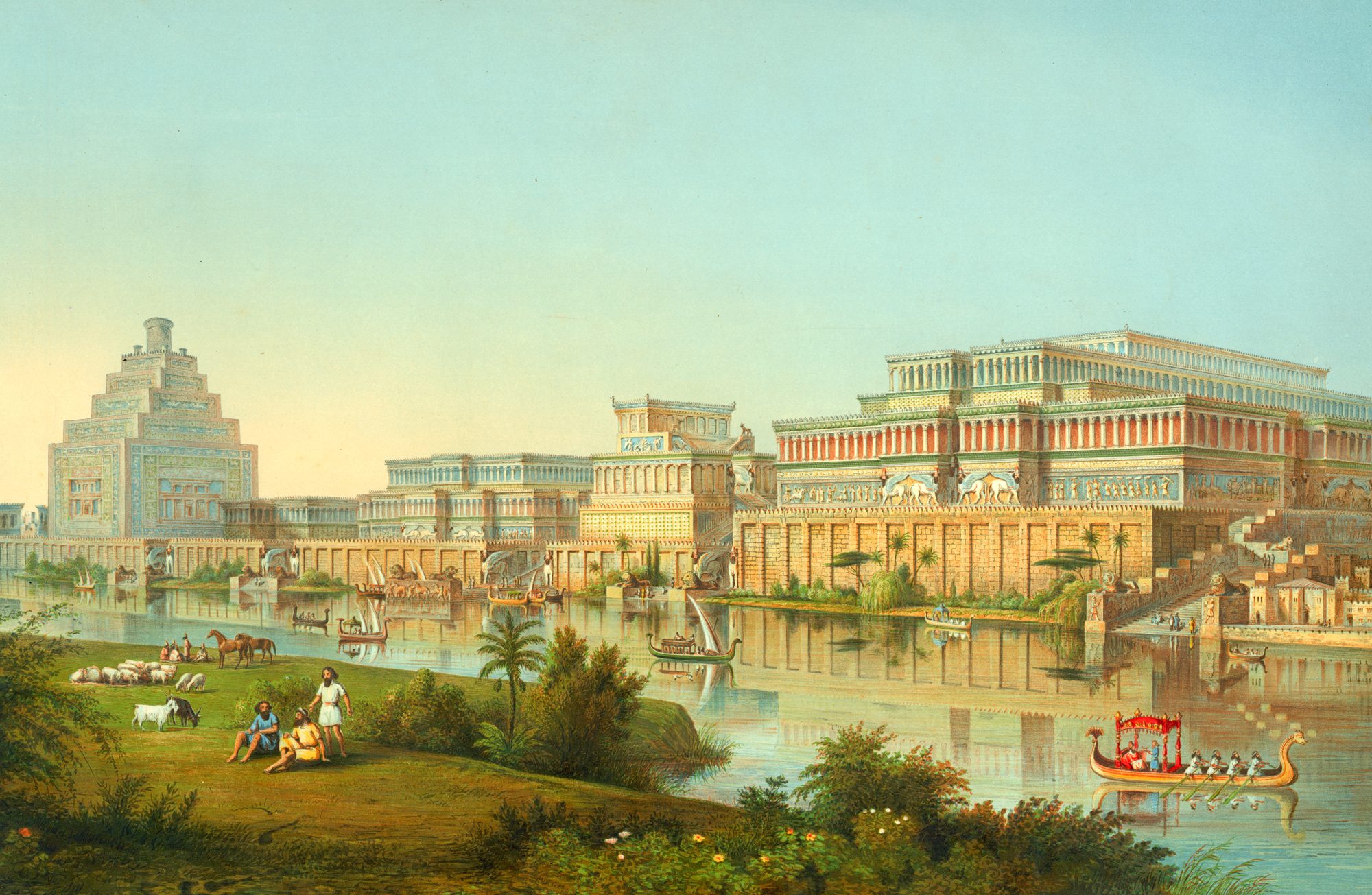 I published my PhD “From Layard to Lara Croft”, which feels unreal somehow, but there it is, my own work. 275 pages, 50 plates, 3 years of work. Obviously, I am very happy about this, as the process of publishing took quiet a while. Not to speak of the writing process. I published in German, but for those who are interested and do not speak German, this is what my PhD is about…

Part 1: The Archaeology of West Asia

So in the first part, I take a deep dive into archaeological reconstruction drawings of the very first archaeologists in West Asia. Namely, I look into Sir Austen Henry Layard and his renditions of a palace interior as well as the cityscape of Nimroud, Victor Place and his reconstruction of Khorsabad, Robert Koldewey and his drawings on the Tower of Babylon and finally Walter Andrae and his renditions of the Anu-Adad-Temple. Before I do that however, I give an extensive introduction into perspective archaeological reconstructions and the history of West Asia in the late 19th/early 20th century. Additionally, I also introduce into the Industrial Revolution, Orientalism and Eurocentrism.

The case of Henry Layard shows how he excavated the Neo-Assyrian city of Nimroud. He reconstructed visually beautiful renderings of a palace interior as well as the cityscape of Nimroud itself. I conclude that he needed to use these visually stunning images to promote his work. Therefore he promoted also himself and the art of Assyria, as it stood in competition to Greek/Roman art in Europe. Victor Place on the other hand reconstructed differently, more distant. His rendering of the palace of Khorsabad was not as colourful as Layards works. I conclude that this was probably because Place wasn’t dependent on sponsors and money. The French state financed his endeavours generously.

These two German archaeologists on the other hand weren’t consuls or assistants to ambassadors, but architects. They had a different mindset in creating visualisations of the distant past. While Koldewey reconstructed more or less solely focussed on architecture, Andrae provided us with the (I think) first immersive reconstruction of the past. In his work “Das wiedererstandende Assur”, he spends a good portion of the book describing an Ionian visitor to Assur and how he must have experienced the Neo-Assyrian city. In addition, Walter Andrea reconstructed very lively, not only showing the architecture, but also the city-life itself.

One thing that became very apparent in researching these images and their authors was how influenced by concurrent politics, relations, and archaeological views these renditions of the past are. I intentionally looked at archaeologists from different countries to see if different schools result in different outcomes. But all of them also had some things in common, which I concluded as three main points in Eurocentric views on ancient West Asia:

Part 2: How West Asia and Archaeology is represented in video games

The second part takes a great leap towards the present. At first, I take a look into current scientific reconstruction projects and how they are handling what I have proposed in Part 1. I also analyse myself and my own reconstructions as this was mainly the motivation to write the PhD. I always felt influenced by Walter Andrae and it turned out, I was. With three examples, I explore how the Eurocentric views on ancient West Asia have survived even today, albeit in other forms. After an introduction into modern media in general, I turn to video games

At first I take a look at two culture-focused video games, which I define as games where the player controls a whole culture or nation. I take a look into the games of Civilisation and Nebuchadnezzar. While the Civilisation series is a well-established AAA game series, Nebuchadnezzar is a lesser known game. I conclude that both games massively use stereotypes to depict certain West Asian cultures. But they mix these stereotypes with a pinch of reality, so to invoke their truthfulness to the past.

The massive use of stereotypes in video games, whether in depiction the ancient past of West Asia or the profession of Archaeology is immanent in the studied video games. I lay out a detailed list of tropes that I found in all of these games, but this list can again by summarised in three main points, what video games dealing with the past depict:

In the final part of the PhD, I bring my studies of the past and present together. I conclude that the Eurocentric views of early Archaeology, based on the Zeitgeist and the Industrial Revolution, had a major impact on how we perceive the distant past today. This finds expression in many media, but I chose video games especially, because it has a wide influence today, that is currently growing. These Eurocentric views from the past survived in video games and led to the depiction of stereotypes based on Imperialism, Social Darwinism, and Orientalism. The problem however is, how these views transfer to video game players.

I argue that when certain recognisable markers are missing (meaning if players can’t decide by themselves what a stereotype/fact is and what not) these depictions transfer into the minds of the players, which accept them as reality. Therefore looting ancient cultures, accepting pseudo-archaeology and racism, as well as other problems are made gradually acceptable. Finally, I discuss the problems connected to these results and how we should treat them in the future.

My PhD is publicly available as Open Access in German. I am thinking about revising a version in English and publishing it as a book in the near future, but this is something for another time. Here you go: