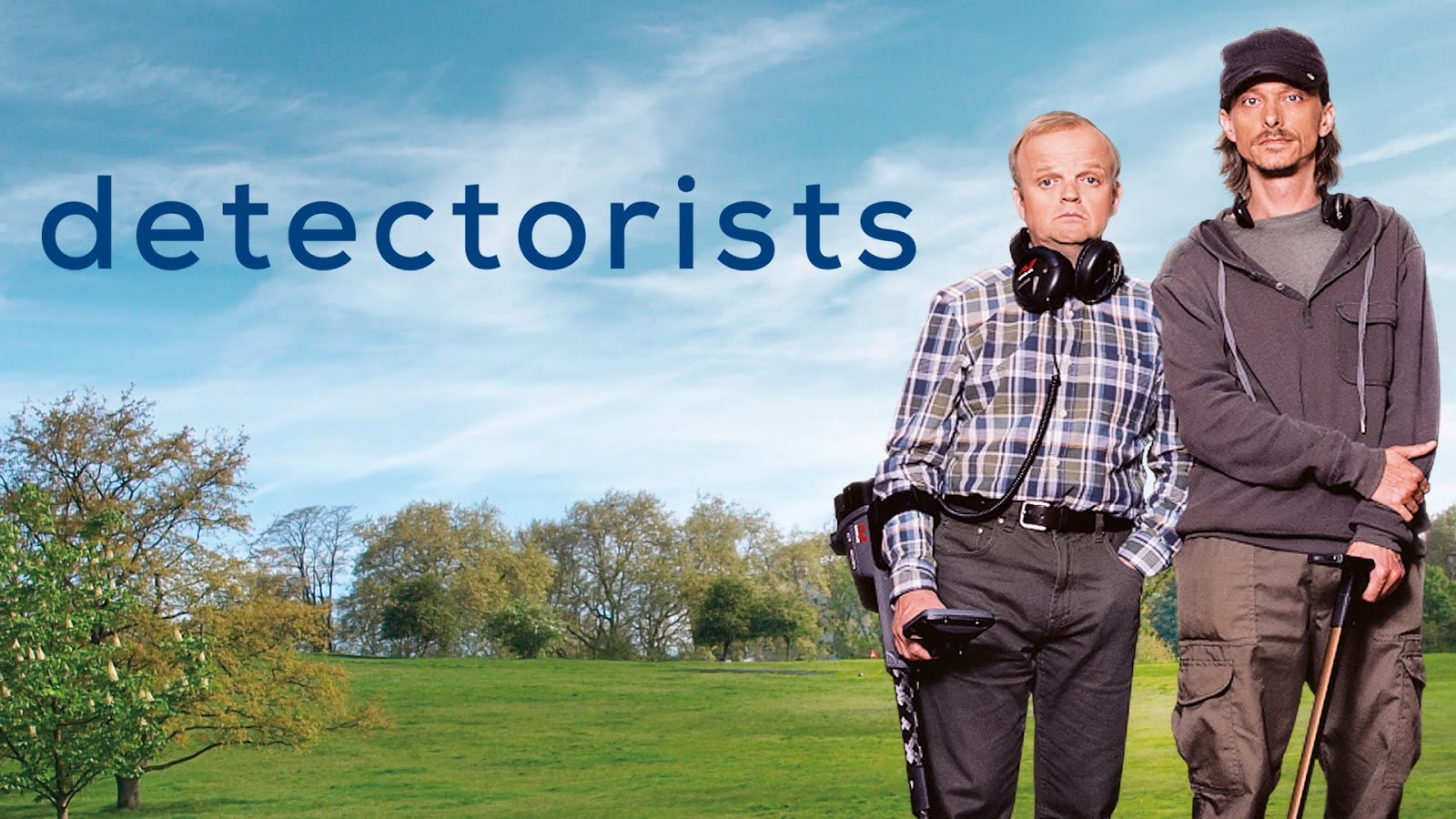 Recently I started watching a British TV series called Detectorists. It tells the story of Lance and Andy, two friends with the shared hobby of metal detecting. Besides finding rubbish in the ground, the two friends search for archaeological treasure, especially gold. Strictly forbidden in Germany, it is allowed in Britain however (with the permission of the land owner). The TV series depicts the profession of Archaeology and the search for antiquities in a satirical way.

The series plays in fictitious Danebury in North Essex and tells the story of Andy Stone and Lance Stater. These two middle-class citizens have a passion for metal detecting. Both are part of the Danebury Metal Detecting Club (DMDC), a rather sad group of people. They repeatedly showing off their finds to basically no one. The series is rather calm, but with poignant situation comedy. Especially as an archaeologist, you’ll find your references within the dialogues.

Besides metal detecting, the series also tells us about the private life of the two main characters. It tells their struggle to find jobs, partners and friends. In an interview, Mackenzie Crook, who plays Andy Stone, has written and directed the series, tells us that the motivation for the series was the interest in other peoples pastime. It is indeed fascinating also to me how people can spend their whole free time detecting. But while watching the series I started to see why.

It might not only be the search for treasure as rather having a calm outside activity. Watching the series actually immerses you into the flow of metal detecting. In parts, I actually understood how doing the work can be calming and fulfilling. In my opinion, Crook did an amazing job picturing the activity of metal detecting, although I have never done it myself.

The archaeology of Detectorists

Archaeologists rather play an underpart in the series, which is fine. Nevertheless, one thing stroke me while watching the series. When actually excavating, archaeologists have to pay special attention on where to dig. We do have methods to look into the ground first, but a running gag on excavations is always the missing trench. Imagine there is a richly decorated grave in the ground, but your excavation trench is just 3 meters to the side. You will never find it.

The TV series Detectorists satirically shows us how this can be the case. While metal detecting, Lance and Andy decide to call it a day and go to the pub. If they only knew that a couple meters further would be the find of their life. Also (this is a spoiler!) while searching for a ship burial, they also give up. While the camera moves up to capture the leaving detectorists and the sunset, we as the audience can see a ship-shaped deformation on the ground, right besides where they were detecting. So close!

I think this series is one of the funniest made in the last couple of years, if you are into British humour. There is no action, monsters or weapons and the narrative is very calm. The stories told however, with the eccentric characters and the general British middle class is picture perfect. This series is definitely not only for archaeologists.

For more information about the series and metal detection, you can have a look at the book “Landscapes of Detectorists” edited by Innes M. Keighren and Joanne Norcup:

Musk will buy Twitter – Where will we meet next?