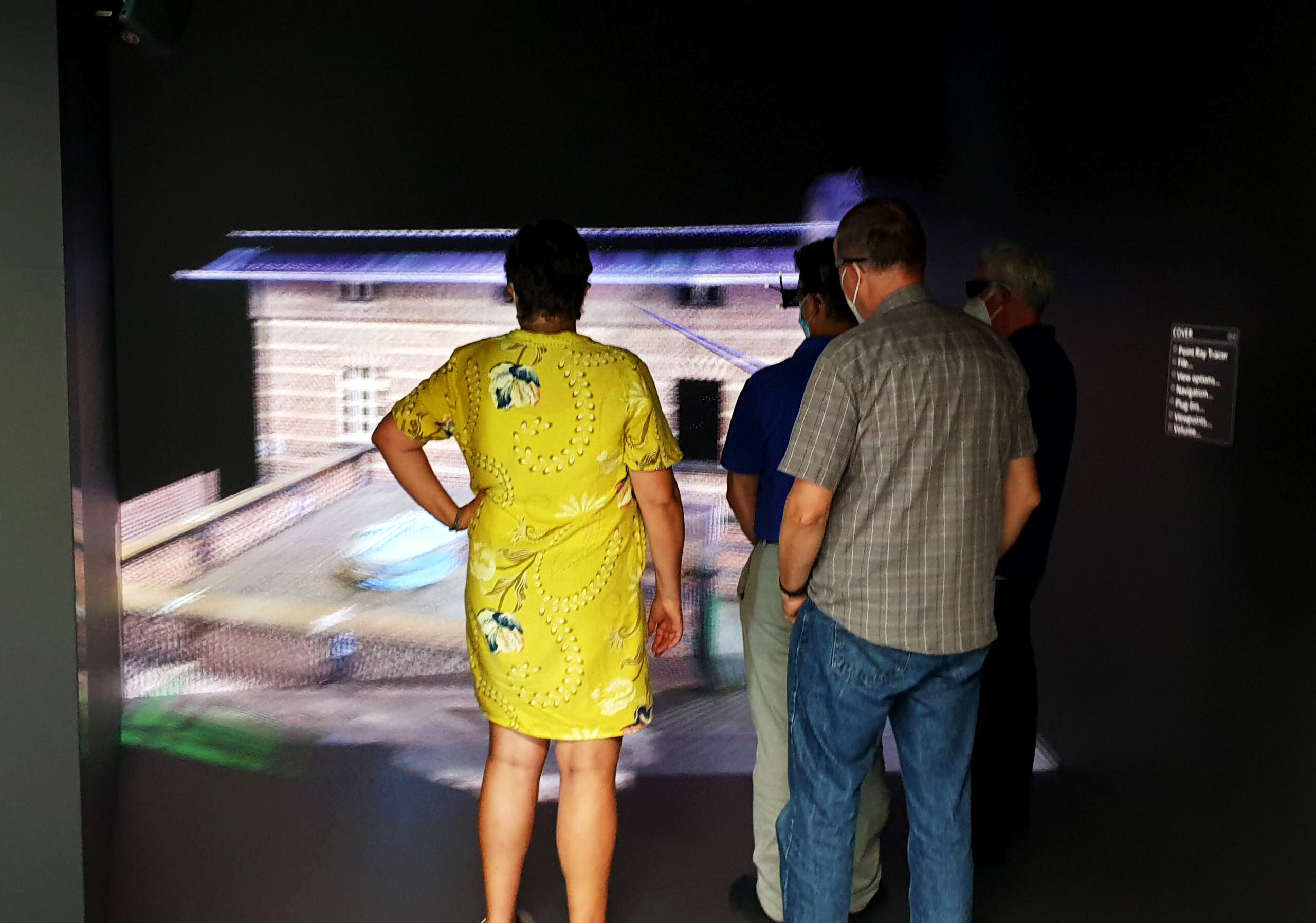 So for years I was hearing about CAVEs (Cave Automatic Virtual Environment), which is a room full of screens to simulate a virtual environment. I knew that these were very expensive and therefore only a few universities actually have one. The big thing about it: A CAVE should enable multiple users to enter this virtual environment at the same time. I was not convinced.

So you probably have heard about Virtual Reality. You get a HMD (head-mounted display) which offers a small screen to both of your eyes each. A computer calculates your position and renders one image for your left and one for your right eye. You brain thinks it is in another environment. Great! But you are alone and have no idea if your colleagues make faces behind your back.

A CAVE tries to solve some of these problems. Instead of a HMD, you go into a big room, where all the walls are screens, usually projected on by big beamers from the back. There are CAVEs with six sides, so a complete 360° experience. Some CAVEs have five or even only three sides, but the technology is the same. A computer calculates your position and displays a distorted image based on your position and viewing angle onto the screens.

So I was in a five-sided CAVE, which was pretty good. I got special goggles on (very light and thin) that had some small spheres attached to enable the cameras inside the CAVE to track my movement. As soon as the simulation started, I immediately didn’t see any walls anymore but was immersed in a virtual environment. Other people can join you, also with special goggles, but the image displayed in the CAVE always only follows one person. The other persons have to stand really close to not have a distorted image.

The image quality was really good, but you weren’t able to point to something on the screen with your finger, as everyone had a slightly different image. You could use a device that projected a virtual pointer in the scene, but this wasn’t very intuitive. I also got a headache really quick and I am usually not very sensitive to this. It might have happend, because someone else was moving me virtually through the scene and I had no sense of what was happening.

Well, I don’t know. I was underwhelmed to be honest. I have quiet a lot of experience with Virtual Reality headsets like the VIVE, Oculus or Microsoft Mixed Reality and have to say, that the quality of the CAVE wasn’t necessarily better. Also today, a VR headset costs around 400 Euro, while the CAVE costs multiple hundred thousands of Euros. The advantage of the CAVE, that you can be joined by others is not really true, as only one person can really flawlessly see what is happening. This might be a different case with non-archaeological models, but this is how I experienced it. I guess I would always rather buy a VR headset and save the money for something else…

The future of 3D