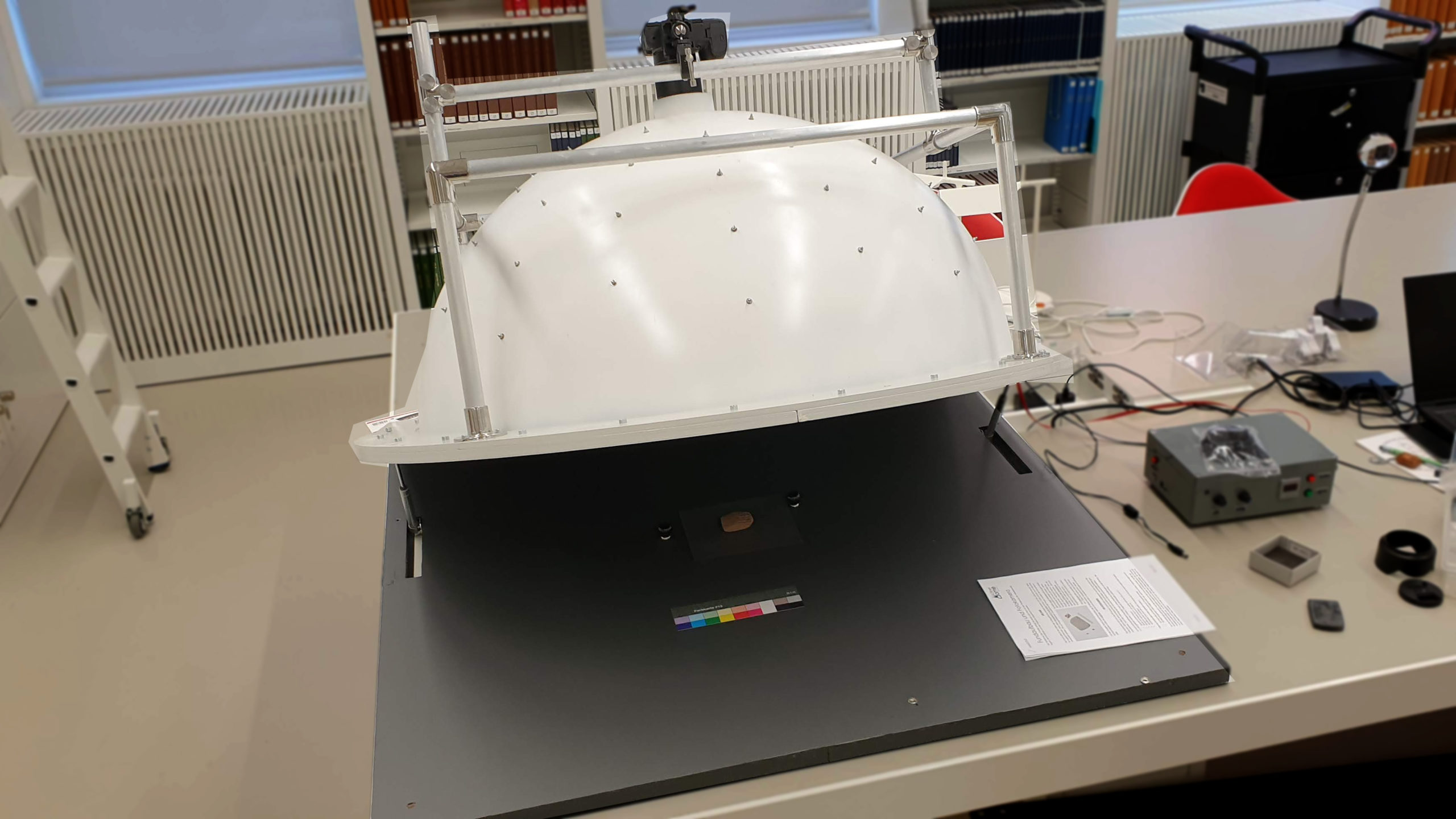 Since 2018, I am building what is called a RTI Dome. Well it is more of a family business to be honest and my retired father is doing most of the work, but we started building two domes for fun and have now sold another one. The building is not the exciting part though, it is the development. Two days ago, I gave a talk about what we did and want to do in the future and this is a summary.

RTI stands for Reflectance Transformation Imaging. It was developed by Tom Malzbender and Dan Gelb of Hewlett-Packard Labs in 2000. Back then, it was called Polynomial Texture Mapping (PTM), but had major developments since then. An RTI image is basically a photo of an object, with some extra information. This information is the Normal of each pixel (basically where each point of an object is looking at). A Normal can be visualised by an arrow that stands orthogonal on each point of the object. But how does this extra information help?

Well if you know the Normals of an object, you basically can simulate where the light is coming from and also amplify the structure of the object with the help of filters. This basically gives you a 2D photo of an object, where you are able to change the light direction as well as apply some filters that show you details of that object, that are not visible with the naked eye. Great, no?

What is a RTI Dome?

The process of taking the pictures to create a RTI file is a bit complicated. You need a sophisticated setup and if you move too much, you have to do it over again. It sometimes is a bit painstaking, but there is a simple solution: RTI Domes. A dome takes away a lot of the work. A RTI Dome is basically a hemisphere with preinstalled LEDs and a hole at the top. You simply put the object inside the dome, attach a camera on top and press a button. All the photos are taken automatically and if done right, without any disturbances.

So why not always use a dome? Well for starters, there are not many companies out there that build RTI Domes. The University of Southampton has done quiet a few and there is a Swiss company that sells domes, but for an astronomical price. Also, sometimes domes just don’t work, if the object is too big for example. Thirdly, not many institutions really know what RTI can do for them, mainly because there is not so much research going on concerning the development of RTI Domes.

This is where I come into play. Since the first two domes we built, I was thinking, that the building process as well as the methodology have to be improved. Everything you need to know for building domes is open source and available online, but this is just the start. There are two main areas where I see the need for development: Hardware and Software.

The hardware is quiet simple really. A hemisphere with 64 LEDs and a box that connects the LEDs with the camera and controls taking the photos. Concerning the LEDs in the dome, other people are already experimenting with infrared or ultraviolet light and LEDs that are capable emitting that light are already available. One could think of installing a multi-spectral camera to catch all three light emissions in one sitting.

The control box that drives the camera and LEDs is also a mess of small parts, cables and whatnot. By bringing everything onto a cheap and easy to reproduce PCB board, you can make the assembly process much easier. I have already written on another blog about this a bit. Also you have to be aware of heat management, because some of the parts drive high-efficiency LEDs and get very hot

The software is also something that can be improved. I already mentioned the heat management. That actually can be resolved be rewriting the software. Instead of driving the LED matrix row by row, you simply rewrite the code to go through the matrix diagonally. This way the parts have time to cool down.

Another point to think about is a way that immediately takes the photos and creates the RTI on the fly. For now, you have to use other software for that, which involves color-correcting, aligning and merging the photos into a RTI file. I think this can actually be done internally and directly.

So as you can see there is a lot to think about and to develop. I already have a name for my product as I was developing it during my time in Cologne (German: Köln), I called it the Kölner Dome. Get it? Well, I think it’s funny.

The out-of-placeness of dirt