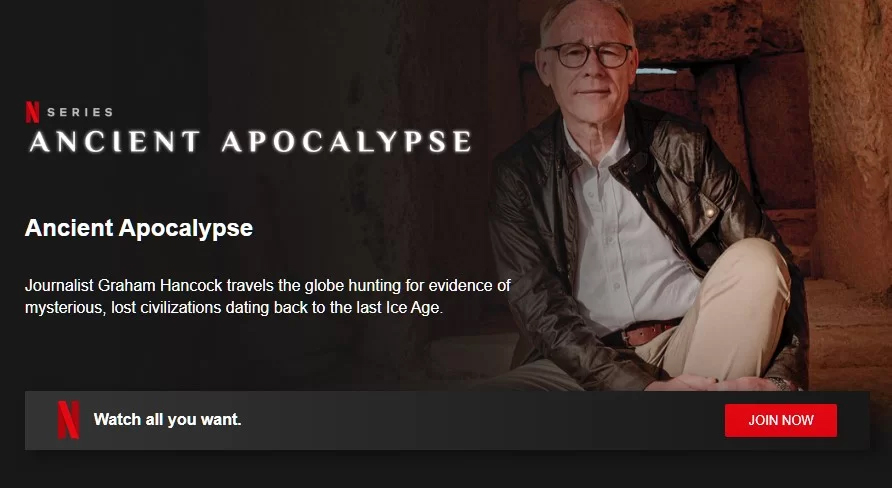 Ok people, where to start? It is always difficult to get down the rabbit hole that is Pseudo-Archaeology, but let’s have a discussion. I watched, like many others, Graham Hancocks Ancient Apocalypse on Netflix and as an archaeologist, am of course outraged what he proposes, how he discredits us, and most of all how Netflix can label this series a documentation.

Journalist Graham Hancock travels the globe hunting for evidence of mysterious, lost civilizations dating back to the last Ice Age.

His own claim sums it up pretty good. Graham Hancock, a journalist, believes in an advanced ancient civilisation dating back to the Ice Age, that was eradicated by a natural disaster (the Ancient Apocalypse), that has left only very few survivors. Today referred to as the Younger Dryas Impact (YDI). These survivors then diffused around the world to pass their knowledge to lesser advanced civilisations, resulting in these mysterious sites he is investigating.

His ideas are not new though. In 1882, Ignatius Donnelly published Atlantis: The Antediluvian World. In his book he proposed the same ideas as Hancock, that a sophisticated culture (Atlantis) had been wiped out by a flood 10,000 years ago. The survivors of this flood then taught the rest of the world its advanced technologies. This theory has later been taken up by the Nazis by the way, that were in search of an Atlantean “master-race”.

This example already shows how questionable these theories are. Hancock uses them throughout his books and the new pseudo-documentary on Netflix. Flint Dibble, an archaeologist from Cardiff University, has created a massive tweet on why Hancocks theories are questionable:

One thing that Hancock does not mention in the Netflix pseudo-documentary, but throughout his books is the notion that his lost advanced civilisation was white. The story Hancock tells is therefore a story about stealing inventions and achievements form non-white people. This is part of Imperial Archaeology and something that also Susanne Duesterberg has shown as a mechanism of colonialism for the Archaeology of Africa . I myself have also written about this concerning videogames.

Why it is so difficult to have a debate

It is difficult to have a debate with someone, who does not provide any real evidence, but uses archaeological evidence instead when it suits him, while ignoring other. He clearly doesn’t want to have a discussion with archaeologists as he repeatedly expresses how “mainstream archaeology” is discrediting him. I myself had a lengthily Twitter discussion that slightly got out of hand in some strains.

One thing I learned was that people respect his advances in proposing a different opinion. I can respect that, archaeologists are often simply wrong, as it is the case with every science. But it is about how you make conclusions and Hancock makes none. He repeatedly mentions the argument “that simply doesn’t make sense to me”. I am sorry Graham, that doesn’t make you right. Be that as it may, I could also live with that, everybody is entitled to their own opinion. What I am really angry about is Netflix…

Netflix categorises the series as a “Social and Cultural Documentary” and as “Investigative”, as if what Hancock does would be any of that. It is not a documentary, as it does not document reality, but instead questions what archaeologists already have found out. That is not wrong, but you can’t questions everything and simply propose something that comes into your mind. Hancock conveniently discusses the lack of evidence away. The big crater of the Metroid impact? Happend on ice, therefore no evidence. Remains of this so-called advanced civilisation? They collapsed and were buried under water, so no evidence.

With this rhetoric, it is quiet easy to propose anything really. Atlantis, Aliens, or globally organised archaeologists, who want to hide the truth from you. And that, I have to say, is the most unrealistic thing I have ever heard. Archaeologists like nothing more than proving other archaeologists wrong. It would be absolutely impossible to keep a secret like that. And it wouldn’t make any sense at all, but I guess that is the problem here. Common-sense seems to have gotten lost along the way of post-factualism and modern media presentation.