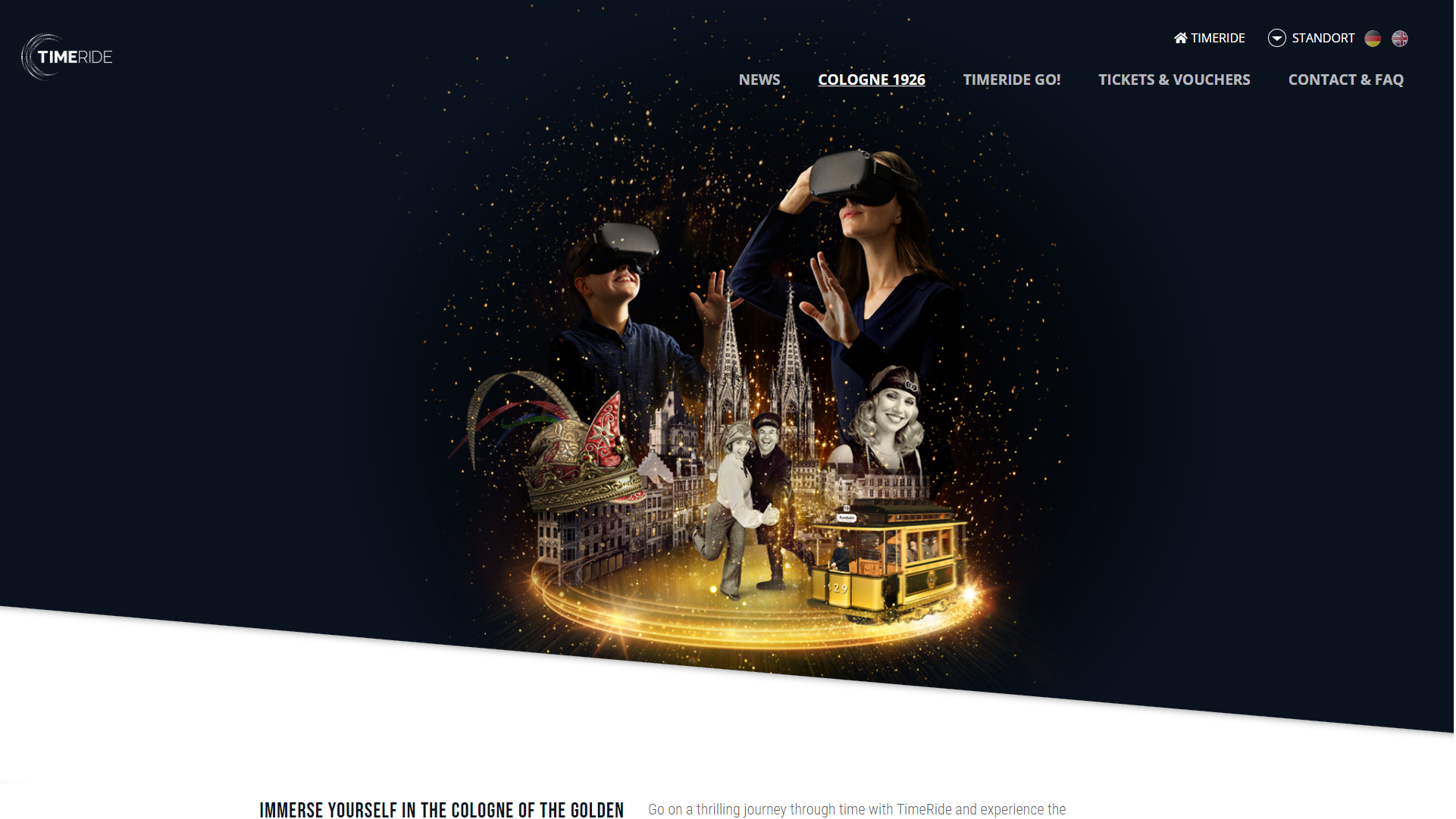 So today, I was in the lucky position to test-ride a service called TimeRide Cologne. The company promises you a thrilling journey through time and in my case a view of Cologne in 1926. The ride is in VR, but the experience was much more than that.

How it all began

So initially, I wanted to test-ride the service, because we are looking for options to entertain some international guests. A former student of mine was working at TimeRide Cologne and offered me a test-ride. After I got my ticket, I waited in front of a 1920ies style cinema entrance. There, an employee in traditional clothes introduced the process to me and the other guests.

We entered the “cinema”, which was just a room with a beamer and a movie started. We were like 8 people in the room, but the film made you feel part of a bigger crowd. The movie was showing old footage of Cologne in the 1920ies and told a story of Tessa Riedschneider, a hat-maker in 1926. The tour was available in German, Kölsch (a German dialect spoken in Cologne) and English.

After the movie we continued into another room decorated as the hat-makers studio. An employee told us a lot about making hats and in the background there was still a movie playing. The employee was actually interacting with the movie in a clever way, so you again got the feeling of being part of something bigger.

We, the guests, had the task to deliver a special kind of hat with the help of the cable car. So after this stop we changed into the next room, where an old real cable-car was awaiting. All of this was still inside and the cable car was not able to move, but in the car, each seat had its own Virtual Reality goggle.

Finally we started the ride. The cable car rattled a bit during the drive, which was completely in VR of course. There was even wind coming from in front to increase the immersion. We were driving through a virtual world of Cologne in 1926, made with the Unreal Engine. It was not the best graphics you can imagine, but it was still very impressive. The city was densely populated and the virtual cable car driver interacted with the people passing by.

He told us about old Cologne and if you were paying attention, you saw pick pockets, car crashes, or other incidents in the background, which were sometimes hard to catch. After a ride of about ten minutes, the cable car reached its virtual destination and we could deliver the hat from the hat-maker just in time.

So this is definitely something for tourists as you have to experience the whole ride as a concept. I was very impressed nevertheless, because it offered a dense story with a clever mixture of real life employees, video film and Virtual Reality. I can totally imagine doing this for an ancient setting and in fact it is kind of the Discovery Tour of Assassin’s Creed, but in Virtual Reality.

TimeRide has five locations in Germany so far, so if you are interested, give it a try next time you are in Cologne, Dresden, Berlin, Munich or Frankfurt.